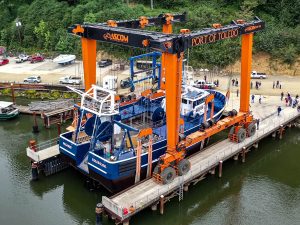 The F/V Pegasus, owned by North Sea Inc. since she was originally built in 1975 at A.W. Covacevich Shipyard in Biloxi MS has undergone the largest transformation to date.  Over the years, the boat has been modified many times including a midbody/sponson, raised main deck, stern extension, pilot house replacement, mast replacement and repowering – to name just the major changes!

During the fall of 2017, the owners of the boat wanted to increase the capacity by sponsoning a second time with the goal of exceeding 500,000 pounds of fish while maintaining a comfortable freeboard.  Some preliminary drawing work had been done at Fred Wahl Marine Construction before co-captain Justin Johnson contacted Hockema Whalen Myers Associates (HWMA) in the winter of 2017/2018 seeking to improve the structural tonnage arrangement by minimizing its impact on the fish holds.  Through the course of that effort, HWMA reworked the structure to suit the new tonnage arrangement and reinforced the original 1975 structure to safely support the loads due to the increased operating draft.  As the project progressed, the lower and upper bow were re-designed, the fish hold capacity and fuel tank arrangement were finalized, the stern gantry was replaced and many other smaller changes to the arrangement were made.  Finished vessel characteristics are as follows:

Even with a boat that has been modified as much as the Pegasus over the years, this project was especially challenging because circumstances did not allow for the hull to be laser scanned as would typically be done for major modification projects.  The end result was a sponson design which was both lofted and ‘hand built’ – a challenging situation.  Elliott Bay Design Group (Seattle, WA) did the lofting for the sponsons under a tight timeframe and provided enough reference information on the NC cut parts for the shipyard to add the parts to an incompletely defined original surface.

Yaquina Boat Equipment (Toledo, OR) led the construction project with support of the Port of Toledo and numerous local contractors.  There were few straightforward tasks on this project.  Many surprises resulting from the extensive modifications over the years were uncovered as the boat was cut apart and we think the boat looks as good as it does in large part due to the tremendous effort Yaquina Boat Equipment put towards converting a design to a real boat in steel.

Pegasus was re-launched in August 2019 and will be fishing soon thereafter.  Now that this major hurdle has been cleared and the boat can go fishing again, the owners are planning on expanding the pilothouse to catch up with the now significantly wider hull.

The HWMA project naval architect for this project was Paul Monical.  He can be contacted at paulm@hockema.com or via phone at 206-365-0919.